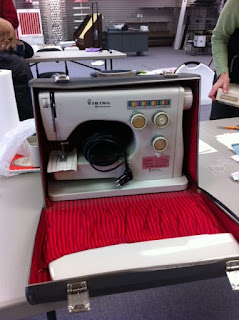 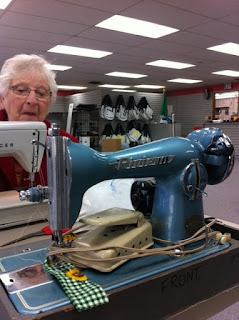 I spent a couple of hours with my friend Margaret Jankowski from the Sewing Machine Project, and several volunteers from a group of retired Kraft employees. We spent some time "sewing in" a big bunch of recently donated machines. That includes opening, testing the stitches and condition of the machines and making sure they are nice and clean for the new owners. Over the past 6 years that the Sewing Machine Project has been collecting machines, Margaret and volunteers have sent machines to Sri Lanka, Mexico, Kosovo, the Gulf Coast after Katrina, and a batch was sent to Haiti last year following the earthquake. It's a powerful thing to handle and care for these machines, not even knowing where they will end up, but so grateful for the opportunity to be of service in some tiny way to people who have lost everything. There are some incredible gems among these machines. I just had to take pictures of some of the vintage machines that were so cool. I don't know what it is about these that is so magical to me, but I hope I never lose this fascination.
Margaret told us about a woman from New York who'd heard about the project, and had taken her machine in an paid for it to be serviced, packed it up, shipped it to her in Madison, and included a check for $25.00 to cover the cost of shipping the machine were it needed to go.
This woman understood the true value of that machine. For many of the recipients, it represents an ability to earn a livelihood that has been washed away or crushed by flood, earthquake, or war.
I wonder where these will end up?
Email Post
Labels: Sewing Machine Project