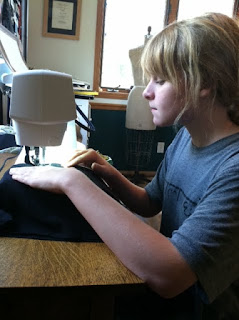 They say that sewing skips a generation.
Maybe not in this case, but I can tell you that most of the people who come to me for lessons say they didn't learn from their mother, but from a grandmother, aunt or teacher.
Mothers and daughters don't communicate in a way that makes teaching sewing smooth and stress free.
I make the machine available, and show how to thread it. But other than that I'm pretty hand's off. I've heard too many stories of someone's interest in sewing getting smothered in all the rules.
Even still, we barely survived Halloween last year. 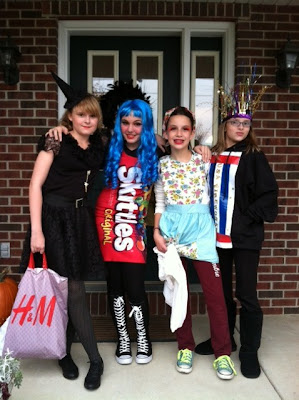 It was so stressful, I'm only just now writing about it, but it all turned out in the end.
We made a witch costume, and I spent most of my time obsessing about making a tiny little steampunk version of a witches hat.
Sometimes this costume bug is a curse.
But I'm telling you that was one cute hat.
Email Post
Labels: costumes halloween kids sewing millinery sewing witch hat

diannac said…
Oh, you are so right, My mother is a excellent seamstress. i never could learn from her and just hated sewing. it wasn't until I turned 50 that, for reasons I still don't understand, I decided to start sewing and really love it. when I told my Mom, she sais "You must be joking!" now we wished we lived closer so we could sew together,

Thanks for your thoughtful post. Your daughter is lovely.
One of your craftsy students.
January 9, 2014 at 9:34 PM